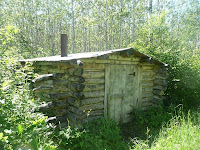 The Daily Graphic
December 22, 2001
By SCOTT CARMAN
In authoring his first book, John Warms had to delve into the psyche of one of the province’s most notorious criminals.

The Carman-raised writer details the life and times of Percy Moggey, the Portage la Prairie native – who would become known for his record-breaking escape from Stony Mountain Penitentiary in July of 1960 – in his recently released book, Over the Prison Walls: The Story of Percy Moggey.

His ensuing shoot-outs with police and escape attempts led him to hard time in two of Canada’s maximum-security prisons.

“All aspects of the information in this story are out of the ordinary,” Warms said. “Percy ... was the first to get over the wall (at Stony), he was at large longer than any other escapee ... it’s remarkable.”

A Manitoba history and folklore buff, Warms wanted to explore the story that made headlines across the country so many years ago.

“In our area, he’s a local legend. In the Interlake, he has become legendary,” Warms said. “In fact, you might want to include Manitoba in that statement, because many folks my age and older remember when Percy was pursued by the police because he was the most wanted man in Canada.”

Written as a novel, Warms needed to develop his character in such a way readers would understand his frame of mind.

Warms needed to know what made Moggey tick, and at times, was disturbed by what he discovered.

“He was a hot-tempered man. People in my family are quick-tempered, a bit impulsive when we’re upset.” Warms said, comparing some of Moggey’s traits with his own. “I like guns. Percy was fanatical. Percy was considered to be a wolf – he operated largely on his own, and I can identify with that. I’m just very fortunate that my forefathers gave me a good (upbringing).”

Despite being written as a novel, Warms did plenty of research – including talking to some of Moggey’s relatives, who still live in Portage – to make sure he got it right. “I'm hoping this is fairly accurate,” Warms said. “Ninety-five per cent of the incidents in this book were learned through people ... who were (involved) in them.”

One thing that remains debatable is where exactly Moggey fled to after the infamous escape.

“There may be only one or two people that would know exactly where Percy went after he escaped,” the author conceded. “But they are not willing to come forward and share this information.”

Moggey did, however, build a hideout in the bush near Eriksdale, which stands today in tribute to the famous criminal.

“I’ve been there quite a few times over the years,” Warms said. “When the grand opening (of the restored building) took place ... it was a special experience being a part of that process.”

“I enjoy the stories of him, the legends,” Warms said. “As I worked through his experiences, he became to me almost like a close friend or a relative. I got to know him quite well.”

Scott Carman
Winnipeg, Manitoba, Canada
I'm a Communications Specialist in Winnipeg, Manitoba, with a background in journalism. I started this blog as an archive of my writing; sometimes it'll be updated on a regular basis, sometimes not. I currently work in the Corporate Communications department of MTS Allstream, Canada's third-largest telecommunications company. I also do freelance writing for Outwords Inc., Winnipeg's LGBTTQ* monthly magazine, and I'm the Director of Media & Communications for Pride Winnipeg Festival Inc. If you like what you see, click on 'subscribe' to be notified of updates. Thanks for stopping by!